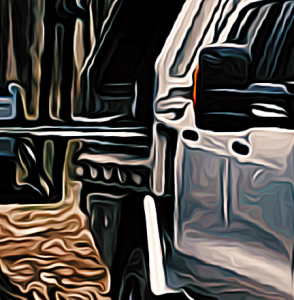 ‘Here she comes!’ I shot into my walkie-talkie, as the roar of the oncoming ute got closer and closer. I silently swore that I hadn’t picked a better position – there was a dip in the road ahead of me that meant I didn’t have as much time to see the monster before it was upon me.

Still, I reasoned to myself, that dip was about to come in handy.

‘Steady,’ Teg’s voice chirped to me from the walkie-talkie. ‘Steady now.’

I took a few deep breaths, flooding my body with as much oxygen as I could, ready and bracing for—

It crested the hill at incredible speed, covered in dust and roaring like a dragon. Everywhere was jam-packed with supplies and equipment our settlement could use, even the under tray tool box. For utes, it was so much bigger than I had expected… or maybe it had just been too long since I’d seen one.

Not just me then.

No time to waste – it was almost on top of me.

I broke into a sprint along the side of the road, like I was starting the most unfair race in the world. The ute was tearing up the road behind me, going faster than my lizard-brain thought was possible.

It was right behind me.

I snuck a glance over my shoulder as my feet pounded against the ground, and quickly judged the distance.

‘Scavenger!’ I heard the cry go up from inside the car. No matter – that couldn’t change anything now.

A heartbeat passed, and something inside of me screamed that now was the time. I’d spent a long time listening to that voice, letting it keep me alive – so I threw myself into the air.

I landed with a hard thud, right in the middle of the tray. I’d studied these ute trays – Melbourne had a collection of them, dummy-rigged so we could practice this motion.

And it had worked perfectly.

I grinned to myself.

Now for the fun part.